Noob Army Tycoon is a Roblox world that is all about being a leader. But how to be the best tycoon to finance your own base? We suggest you have some workers to earn money, then with the cash you earn, keep buying more, from workers to gunners for your army, vehicles and more. At HDGamers we present you the updated list of active codes for Roblox Noob Army Tycoon. With these cheats that are renewed from time to time you can get money, research and gems to create new buildings, buy vehicles and more.

We know that trying out code and not working is really frustrating. Do not hesitate to let us know if any of these no longer works, in order to change it from the list and not dirty the active and valid codes. Here is the updated list of Noob Army Tycoon codes.

The list of expired Noob Army Tycoon codes that we leave here is useless, but it tells us that new opportunities constantly appear for players. Of course, we will promptly inform you of any developments.

This is not complicated. Simply start the game and press the code button on the left side of the screen. There it will look like a new window where you will have to enter each work code in the text box. At the end, press ‘Confirm’ to receive your rewards.

How to get more Noob Army Tycoon codes

Many know that the best way to get more codes is to follow the developer of the game, in this case Noob Army Tycoon. You will need to go to Twitter and search for @denetroll, or you can join the Thinking Project Roblox group to get some free reward. 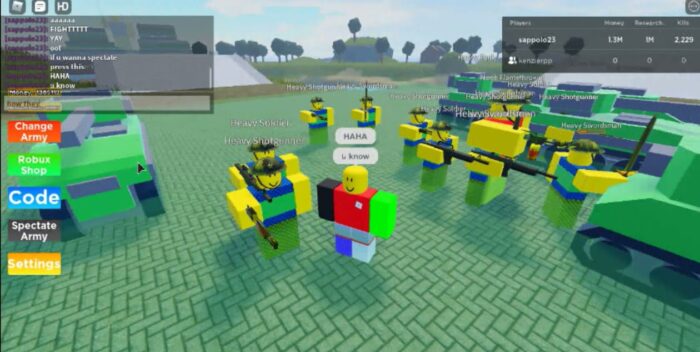 If you want to know the new Noob Army Tycoon codes before anyone else, you just have to log in and follow this post. Good luck!

What is Army Noob Tycoon?

This is a game that has been available since April 4, 2021 and has 200 million views and, 2187 active players to date. When you enter this universe, you become a warrior who only by attacking his enemies can get or rather take possession of strategic points. According to the official page, this is a game of the military genre and offers you up to 100 troops, ships, tanks, airplanes and other weapons to defend yourself from any rebel that wants to do his own thing. Army Noob Tycoon is available both in its free version, and in a fairly inexpensive premium version that offers you additional pawns and investigators that are clearly not available in the free version. Even so, with Army Noob Tycoon, you can have a lot of fun.

Check out these posts: