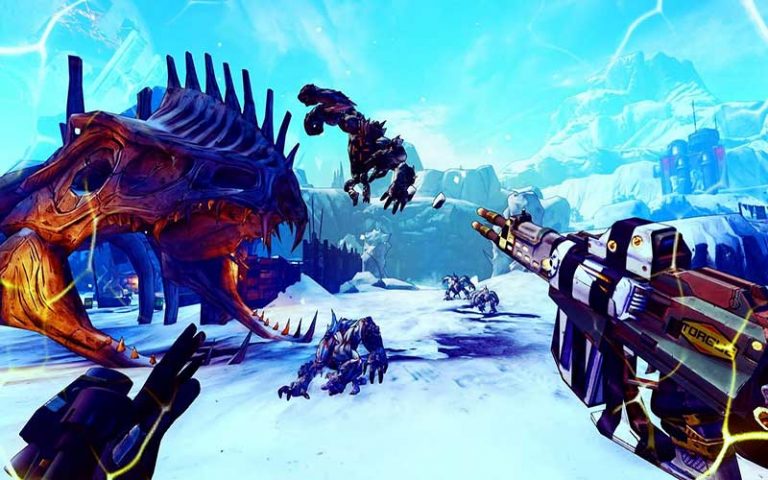 Gaining experience and leveling up will always be the foundation of all games. There comes a point where this becomes a real challenge. So big that many give up and look for a new beginning. To avoid that, HDGamers will teach you how to level up in Borderlands 2 in a way, if you want fast but quite entertaining.

What is this idea about?

It is important to know that this method of leveling up in Borderlands 2 is applicable at any time.

But we will focus from level 72, where the challenge is a bit more interesting.

So, here we tell you about a simple method of farming XP.

It should be noted that it has already been tested in Ultimate Vault Hunter mode to get XP relatively quickly and painlessly. Giving very good results and therefore we recommend it

Among its advantages is that you do not need to have any special equipment or anything out of the ordinary. Just something you can defend yourself with and that’s more than enough.

Or, consider what you need to quickly defeat top bosses like Warrior or BNK3R.

With this, you will be able to harvest XP quickly and using the least labor or some type of preparation to do it.

Bottom line, so you have a more general idea of ??what the method is about. You just have to go several times to end the life of one of the bosses who, despite giving you little XP, you can repeat the hunt several times and earn, at the end of the day, a good amount of experience points.

The easy way to farm

Apart from cultivating XP to level up in Borderlands 2, they will help you find equipment and other useful things.

Here are the steps to follow in the easy method:

An important point that you have to know is that the amount of XP that you gain here will increase according to its level.

Although you are happy, it is not much you earn but it is a small reward for your work on the battlefield.

But if we talk in terms of real XP, each boss will produce more than 5,000 in the lower levels, somewhere between levels 55 to 70 approximately. But you are going to earn the modest sum of 6 thousand more at the top end. That is, between level 70 and 80.

The best part is that we don’t tell you about the exp you earn if you have the Moxxi Crew bonus. Or, the extra XP for things like killing the Hodunk / Zaford growls that appear with the boss.

They are also easy, but if you have everything, this will gain a lot of experience. Consequently, you will go up much faster.

On the other hand, as a side effect of this method, and it’s not a bad thing like medicine, you’ll be cultivating some pretty useful legendary items that drop from each of the bosses.

Specifically we refer to La Maggie or Slagga by Zaford or Hodunk and the Lyuda and Veruc by Gettle and Mobley, respectively.

With this, you will be able to harvest XP quickly and using the least labor or some type of preparation to do it.

Bottom line, so you have a more general idea of ??what the method is about. You just have to go several times to end the life of one of the bosses who, despite giving you little XP, you can repeat the hunt several times and earn, at the end of the day, a good amount of experience points.

The detail of the missions

Continuing with the explanation of how to level up in Borderlands 2, we tell you the detail of how to do this mission.

To get started. You have to complete both side missions that we discussed earlier.

But if you do not want to go back in reading, we remind you that the missions we refer to areThe Good, the Bad and the Mordecai, and the entire series of Zafords Clan War against Hodunks missions.

If you don’t know anything about them, we warn you that both are quite long and extended side missions.

However, we recommend doing The Good, the Bad and Mordecai first, as it is a bit shorter. In addition, with it you have the opportunity to ensure that you have the Moxxi team early.

Once you finish this mission, you will have to do the Zafords Clan War against Hodunks. Which is actually a set of several small missions.

When you’re close to finishing the last one. Right at the end of the Clan War quest series. You will be forced to choose a side. This is important since it will determine which boss will reappear at the train station.

An idea from the bosses

Although we are not going to tell you which side to choose or which boss to kill to harvest XP to level up in Borderlands 2.

The best we can do is tell you something about the bosses that allows you to have a certain advantage over them.

The first of them is Dad / Tector Hodunk. He is definitely the easiest boss to grow for various reasons.

Starting with what spawns or appears on the other side of the train from where you are. It’s a huge plus just because it gives you more time to prepare for the fight. He really believes you will need every second.

It is also important to always keep in mind that you are armed with shotguns. Which are less effective at a distance.

On the other hand, Mick Zaford appears right next to you on the train platform. The downside of it is that you have much less time to react. But this makes it faster to find and kill.

His shield allows him to become invisible, his weapons are often very powerful, and he is a smaller target than the Hodunk boss. Still, it’s still pretty easy to kill and shouldn’t be a big problem.

Whatever your choice, it is recommended that you kill the main boss first, and then all of his followers.

This is an important topic for your game. At HDGamers we recommend that you choose the train station to make it easier for you to level up.

To make the train station your spawn point, just quickly go to Lynchwood.

Then jump in and take the exit to The Dust on the train and voila.

After that, you will respawn on the platform at the Dust train station every time you save / leave.

Returning to the theme of bosses. Once you have turned up and killed any of Zaford / Hodunk’s choice and their followers, grab a vehicle from the Catch-A-Ride, it will always be there near the station, and start heading to church.

You can see the bell tower silhouetted against the sky in the distance. At this point you should head slightly to the right.

We recommend using the turbo boost. It is a long journey and you need time.

In this order of ideas, you will have two options for your trip, one longer than the other.

You can check the 2 spiderant spawn points on either side of the rock formation directly in front of you at the train station.

You will drive through one of them anyway.

The other simply involves going around the rock formation.

Once you get to the other side of the Dust near the church you will be looking for a ledge. Get out of the vehicle and jump in it on it.

Then you have to walk along the ledge until you can jump behind the church.

At this point you will surely be harassed by a gyroscope and a pair of bandit technicians on the ledge.

But, if their presence bothers you and you want to kill them, they shouldn’t be much of a problem. As long as you have a decent team.

Walk to the front of the church and Mobley will meet you.

Also, Gettle jumps from the direction of the Hyperion Gulag, to the left of your position, just a few seconds later.

You don’t have to face them as most of the time they will ignore you and fight each other. However, if you want to kill them, it is up to you.

You can start by killing Mobley as soon as he leaves, and then A Gettle when he arrives. Or wait for Gettle and kill him first, as he’s usually the toughest boss. Although the order doesn’t really matter, they will always give you good XP.

In such case, to gain more XP we recommend that you kill both. Then save / exit, and repeat.

At this point there is a small variation on the story.

With which you will find a more widespread method that can be used to cultivate better equipment in addition to XP.

Instead of giving up, giveAfter killing Gettle and Mobley, you can jump into the ravine (Bug Gulch) on the other side of the churchyard.

Here you will encounter more enemies and new options to earn XP and equipment. It’s a bit longer, but it’s worth a try.

Although it is not the only method to level up in Borderlands 2. It is the one that in HDGamers we recommend.

However, some questions may arise regarding it, such as:

The latter case means that the time to cultivate them increases by a quite significant amount.

With this method, spawning in the area where these minor chiefs are grown is immediate and can be done at any time, almost instantly, as long as you can get to a fast travel station.

Also, cultivating loot and XP at the same time is counterproductive since loot will be much less useful after a few levels.

The primary focus of this method is XP only, while loot is incidental.

It is important to mention that there is another version of this method.

Which involved spawning at Ellie’s and going through Bug Gulch, killing Gettle and Mobley, and then jumping back into the ravine to see if the Black Queen would spawn (in the flat area, behind the bandit camp).

Likewise, The Black Queen was worth a significant amount of XP (like 12,000 more) and appeared quite frequently. But, with the current version of BL2, we are rarely going to see a Black Queen spawn.

On the other hand, when you are on the train platform, see if the Gwen Head box has been spawned.

It will be on the part of the platform closest to catch-A-Ride (near the 2 Dahl containers).

Although it is enough information to digest and it is not the only way to level up in Borderlands 2, it is the one that we recommend the most and with which you will not lose interest in this incredible game.