In the vast multi-universe gamer we find an endless number of inspirations. From past glory days to futuristic dreams where we can colonize other worlds that we do not even imagine exist. It is in this section where stellar trips with ships such as the Behemot enter Endless Space 2 and here at HDGamers we will teach you everything you can do with it.

What is the Behemoth?

The Behemot ship in Endless Space 2 is one of the most important space ships you should have in your fleet. Not only because of the size and how powerful it is, but because of how practical it ends up being in terms of exploration.

And it is not only left with this fusion. Depending on the modules you equip, it will be able to adapt perfectly to a fairly considerable number of tasks and functions for your fleet. Which makes it one of the most important ships of the game.

However, due to the high capacity it has to mold itself to the needs of the players. It is a ship that requires special knowledge and is somewhat complex to operate. Therefore, at HDGamers we bring you this guide with which you will learn about the most relevant aspects regarding the usefulness and configuration of Behemot .

Basic aspects of the Behemot

Before starting with the tasks that you will be able to execute with this powerful and practical ship, we will explain a little about its most basic characteristics and curiosities.

As we have been discussing, the Behemot is a ship that has a wide field of action. Which will depend on the configuration you use for it. Likewise, you will have to choose a specialization for each ship you build. From here, you can assign your space ship to a particular function.

In this sense, we have to tell you that specialization is only one branch of the study of Behemoth technology. By the time you hit a particular one, your skills and settings will be tied to it as well as your helmet.

After choosing the specialization, you can assign your Behemot to one of the following activities that we will describe below.

Exploration tasks are often a mystery. It consists of traveling to completely unknown territories on the map for the sole purpose of collecting information about them. Discover new worlds, resources, allies, or even enemies. So your Behemot must be prepared to face the unknown.

The first task you will have as an explorer aboard a Behemot will be that of a scientific seeker . It is crucial for the knowledge of all the regions.

This particular feature will provide players with all information related to research points. From its location, types of research that can be carried out efficiently in said nodes. As well as the resources that you can find here.

Remembering that you are facing a journey into the unknown with this type of mission, it is quite useful, and even entertaining, to carry out this task.

The parser task will start once the scientific finder completes its own. It could be said that it is a more specific task since the player must choose which node to focus on all the time to know even the smallest detail about it.

Although the most important data an parser will find is linked to the resourcesYou are strategic to be found in the nodes where they are designated.

The mining function may not be as striking as the previous ones since, in short, it is the last one performed. But it ends up being just as important so it doesn’t have any kind of waste.

It should be noted that one of the modules that you must equip your Behemot for exploration tasks will be mining probes. As their name indicates, they will be devices that you will deploy on the nodes that you have already investigated and will be in charge of extracting all the indicated resources.

On the other hand, you have to know that these probes will only work for a pre-established time, so you must be aware of the timings to get the most out of mining. 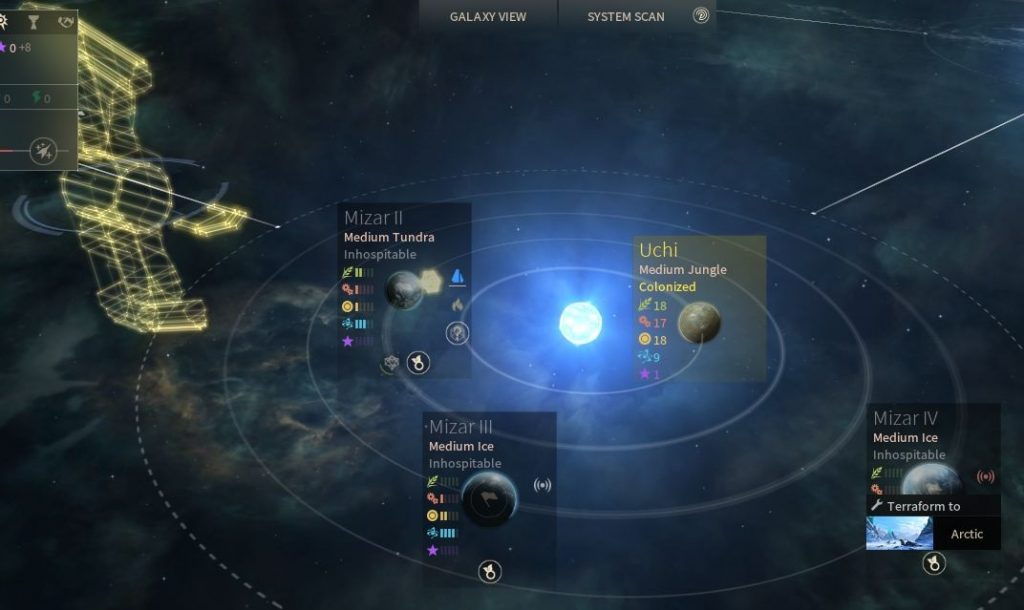 Once you know everything you want about a particular system or node, thanks to the work of exploration. It will be in your hands to decide whether to conquer it, as long as it is of benefit to both you and your fleet. This is where the military tasks of the Behemot come in.

And not to mention the graphics in the starfights that make this work one of the favorites by users, so without further ado, we present the tasks that you can perform with the Behemot in the field of battle.

It is one of the most powerful configurations of the Behemot since its specialization will give you a x6 multiplier. This will give you good firepower, movement speed and, above all, it will unlock the tractor beam module.

A very useful weapon on the battlefield, and entertaining to use in addition, which will allow you to attract and keep enemy ships in the attack range of your weapons. If you want to battle and conquer new worlds, make sure you have a battleship.

Destroyers are the most robust, strong, and powerful ships you’ll find in the Behemot setup. It has multipliers x8 (the maximum for her).

His specialization will give him one of the highest defenses and HP points in the entire game. Also, just like the battleship, it will unlock a special ability.

It is the Ion Wave or ion wave. It is an ability that will allow you to destroy the entire enemy fleet with a single attack. Very good indeed. However, it will disable your battleships for a good number of turns. So use it with extreme care and, if necessary, as a last resort.

If the destroyer seemed like a pretty entertaining setup with incredible firepower, it’s time to talk to you about the Obliterator.

Unlike previous configurations, this is a ship that doesn’t need to go to the node or the battlefield. It is more of a system destroyer. Yes, as we are describing it. His special ability is a missile that, as slow as it can be, can destroy an entire star system in one fell swoop.

Maybe it won’t have the same defense as the destroyer, in fact it has one of the weakest helmets. But it makes up for it with unique destructive power. If you want to command respect, this has to be an acquisition that you must have in your fleet.

Diplomatic tasks are among the most variable tasks that Behemot can perform in Endless Space 2 . They have as their main theme that of caring for and modifying the neutral worlds and governing those that are already part of your federation.

One of the aspects you must have to cover them is to have all terraforming and anomaly technologies unlocked. Once you have them, you can send your Behemoths to rule the worlds of your choice.

A task that is dedicated only to planets whose state is neutral. As its name indicates, it will be in charge of containing, understanding or eliminating any anomaly detected by the explorers.

Another of the diplomatic tasks that Behemot can perform in Endless Space 2 , is about modifying the colonized worlds for the sustainable development of your federation. The practice of terraforming will be the only option that you can cover with this important work.

It is a very particular task since it will allow you to recover planets that you consider useful but that are destroyed or on the verge of collapse.

Basically what they do is provide the necessary resources to promote the self-sustenance of the systems that make it up and thus be able to recover them and, obviously, they will have a debt with your federation so great that they will have to become colonies of it. A good way to expand your star empire.

At this point you must remember the firepower of the Obliterator, capable of destroying an entire system in one fell swoop. A power that your enemies also have within their reach, although you do not know it, it is better to take the necessary precautions.

In this sense, the Citadel function of the Behemot will bring such a high defensive level to the system that they can make it almost immune to the attacks of the Obliterator </ em> enemies.

Actually, the qualities of this configuration are so many that we must state them as follows:

As you can see, it is a more than necessary function to defend your federation from enemy attacks. A task that can be considered as one of the most important in the game.

So now that you know all the functions and importance of Behemot in Endless Space 2, you just have to build them and start your star journey and galactic conquest.