From the origins of humanity to take screenshots in Windows operating systems, the method was the same: Press the PrtScn, that would be an acronym for print screen in English. Then what is customary, traditionally speaking, is to go to Word or some other editing program to paste the capture and save it Join the future! Discover how to take screenshots in Windows 8 in the best style of 2020.

How to take automatic screenshots in Windows 8

The new tools in the screenshots in Windows 8 allow you to automatically save them in a specific folder designated for them. The keyboard command is similar, you must press the PrtScn, but in this case adding the Windows button, that is Windows + PrtSc, this command is more cool, we tell you why:

Windows 8 in addition to saving them in a folder will do you the favor of giving a name to each file, each screenshot you make will be called “screenshot” followed by the number in which it was captured. For example, Your first screenshot will be called Screenshot 1 and the numbers will gradually increase.

Discover How to Defrag your Windows 7, 8 and 10

How to capture only windows in Windows

There is even more, if you are using several windows at the same time and you only want to copy the one you have open, without seeing your entire desktop in the background, you can use the Alt + PrtScn command. The bad news is that with this keyboard shortcut your screenshot will only be copied to the clipboard. It will not be immediately available in the screenshots folder. If you use this option remember that you must go to some program and copy the screenshot of the window.

It happens frequently that once you get used to taking screenshots in Windows 8 you forget that sometimes (When you use alt + Prtsc) you must paste them in another program, be careful with that.

If you used extra applications to take screenshots from your computer, Windows 8 will not be necessary.

You have already learned how to take screenshots in Windows 8 Did you find it useful? What other information would you like to get from this operating system. 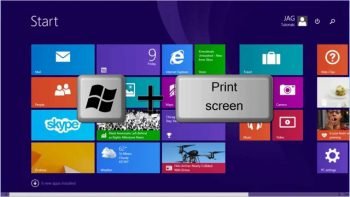